Right then, where to start!! This is the first time that we have set ourselves a goal on the greenway and happily we achieved it.

Basically at the point where we finished on the last workday, to the point that is where the greenway crosses the Coventry Road (the end) is 0.20 miles. I decided that if we clear 0.04 miles of path on each of the next five workdays, then we will get to the end before the end of the month. 0.04 of a mile sounds like no distance at all but convert it into meters and suddenly it is 65 scrubby, hawthorny, blackthorny, brambly meters and it isn’t quite the easy ride that it looks, in my mind’s-eye. 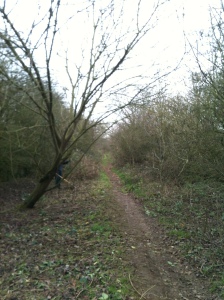 We are working round larger trees. Look how the higher trees on the edge have forced this tree to grow at an angle.

But we made it and managed to release a lovely Ash clearing whilst we were at it. We didn’t chop and trees down but did a lot of lopping of branches on the inside edge of the path. 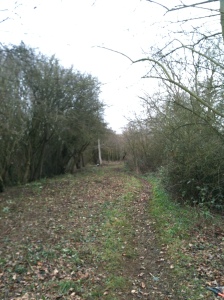 65 meters of cleared path. If you look at the last blog you will see the photo of this before we cut it back.

There are loads of Ash trees and also some really good specimen trees, as we push on down, and I really think that we need to clear the scrub around them and kind of release these trees to allow them to thrive. At the moment they are just being crowded out by the higher trees on the edges overhanging the path. 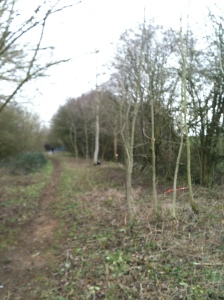 Ash clearing that previously we would of cut down. We are now a bit more imaginative...

Mike continued with his hedge-laying and Matt found out why we are flooding up by The Bear. Plenty to do and time is ticking by. I wonder if we can do another 65 meters tomorrow?

Good turn out today with nine of us making it. Thanks to all who mucked in. I am really impressed with where we are at.